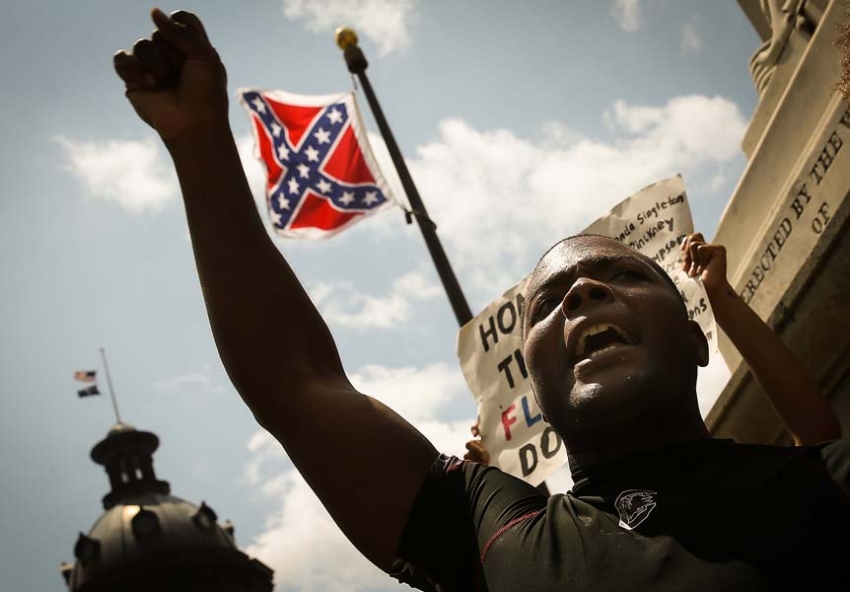 Back in May, I gave a comment to Bill Torpy of the Atlanta Journal-Constitution about the Confederate battle flag controversy at Nash Farm “Battlefield.” As those of you still read this blog may remember, when I lived in Henry County, I was heavily critical of Henry County’s use of eminent domain to take the property on which a misguided county commissioner claimed a Civil War “battle” was fought.

My view is that the Confederate battle flag shouldn’t be flown on any government property. For a large number of citizens, that flag is offensive and harkens back to a time when people were treated as property — truly a stain on America’s history. Of course, we shouldn’t forget this part of our past, lest we be doomed to repeat it. Putting the flag inside museums is more appropriate. Statues are more difficult given the cost involved with removal. Nevertheless, the same point applies.

There is a push where I live in Covington, Georgia, which is more well known as a filming location for the television show The Vampire Diaries, to remove a statue honoring Confederate soldiers from the town square. I noticed an active Facebook thread with a lively debate over the issue. One Facebook friend posted a photo of the memorial on the statue, which reads:

While this monument is erected in memory of Confederate soldiers and the sacred cause for which they contended, it is also intended to commemorate the noble women whose peerless patriotism and sublime lives of heroic and self-sacrificing service enhanced the holiness of that cause and prolonged the struggle for its supremacy, by inspiring its champions with increased ardor, enthusiasm and gallantry in their contest.

Look, I don’t believe in “safe spaces,” and I find that the vast majority of people who claim that they are offended by something are annoying and should be ignored. But some residents of Covington may take offense to the notion that Confederacy was a “sacred cause” or that it was in any way “hol[y],” and we shouldn’t so easily brush aside their complaints, as some are doing.

There is plenty of revisionist history surrounding the Confederacy. But it’s clear that the most prominent theme in was slavery. In Georgia’s Ordinance of Secession, slavery is mentioned in some form roughly three dozen times. Certainly, other issues were mentioned, but slavery was, by far, the most prominent theme. The opening lines of the ordinance make that very clear:

The people of Georgia having dissolved their political connection with the Government of the United States of America, present to their confederates and the world the causes which have led to the separation. For the last ten years we have had numerous and serious causes of complaint against our non-slave-holding confederate States with reference to the subject of African slavery. They have endeavored to weaken our security, to disturb our domestic peace and tranquility, and persistently refused to comply with their express constitutional obligations to us in reference to that property, and by the use of their power in the Federal Government have striven to deprive us of an equal enjoyment of the common Territories of the Republic.

On March 21, 1861, Georgia’s own Alexander Stephens, who would become the vice president of the Confederate States of America, vigorously defended slavery in his infamous “cornerstone” speech:

But not to be tedious in enumerating the numerous changes for the better, allow me to allude to one other-though last, not least: the new Constitution has put at rest forever all the agitating questions relating to our peculiar institutions-African slavery as it exists among us-the proper status of the negro in our form of civilization. This was the immediate cause of the late rupture and present revolution. Jefferson, in his forecast, had anticipated this, as the “rock upon which the old Union would split.” He was right. What was conjecture with him, is now a realized fact. But whether he fully comprehended the great truth upon which that rock stood and stands, may be doubted. The prevailing ideas entertained by him and most of the leading statesmen at the time of the formation of the old Constitution were, that the enslavement of the African was in violation of the laws of nature; that it was wrong in principle, socially, morally and politically. It was an evil they knew not well how to deal with; but the general opinion of the men of that day was, that, somehow or other, in the order of Providence, the institution would be evanescent and pass away. This idea, though not incorporated in the Constitution, was the prevailing idea at the time. The Constitution, it is true, secured every essential guarantee to the institution while it should last, and hence no argument can be justly used against the constitutional guarantees thus secured, because of the common sentiment of the day. Those ideas, however, were fundamentally wrong. They rested upon the assumption of the equality of races. This was an error. It was a sandy foundation, and the idea of a Government built upon it-when the “storm came and the wind blew, it fell.”

Sadly, a statue of Stephens sits in Statuary Hall in the United States Capitol in Washington, D.C. Whenever I’m in the Capitol, I see it, and I shake my head. Thanks to a provision in the Consolidated Appropriations Act of 2001, found in 2 U.S. Code § 2132(a)(1), Georgia can replace the statue, although the General Assembly would have to pass a resolution and the governor would have to sign it. I also think the Georgia state flag should be changed, as it’s based on the first Confederate flag, a fact that most don’t appear to realize.

Neo-Confederates would, undoubtedly, claim that the vast majority of Confederate households didn’t own slaves. The most frequent line I’ve seen over the years is that less than 2 percent of households owned slaves, which, those using this line seem to believe, made the unnecessary conflict about other issues, such as “state’s rights.” The percentage of slave-owning households was substantially higher, likely around 31 percent, according to relevant data.

The General Government, as the common agent, passed laws to carry into effect these stipulations of the States. For many years these laws were executed. But an increasing hostility on the part of the non-slaveholding States to the institution of slavery, has led to a disregard of their obligations, and the laws of the General Government have ceased to effect the objects of the Constitution. The States of Maine, New Hampshire, Vermont, Massachusetts, Connecticut, Rhode Island, New York, Pennsylvania, Illinois, Indiana, Michigan, Wisconsin and Iowa, have enacted laws which either nullify the Acts of Congress or render useless any attempt to execute them. In many of these States the fugitive is discharged from service or labor claimed, and in none of them has the State Government complied with the stipulation made in the Constitution. The State of New Jersey, at an early day, passed a law in conformity with her constitutional obligation; but the current of anti-slavery feeling has led her more recently to enact laws which render inoperative the remedies provided by her own law and by the laws of Congress. In the State of New York even the right of transit for a slave has been denied by her tribunals; and the States of Ohio and Iowa have refused to surrender to justice fugitives charged with murder, and with inciting servile insurrection in the State of Virginia. Thus the constituted compact has been deliberately broken and disregarded by the non-slaveholding States, and the consequence follows that South Carolina is released from her obligation.

My family has roots in Georgia dating back to the late 18th Century. Some of my ancestors fought for the Confederacy. Some of my ancestors owned people as property. I’m not proud of either of these facts about my family history. I don’t believe that Confederacy should have existed. I recognize that some don’t share this point of view. Of course, people are entitled to their own opinions, but I believe those who espouse myths of the Confederacy are horribly wrong.

Sadly, the hyperpolarized atmosphere and the rise of movements like the fascist “alt-right” and the counterproductive actions of the other side of this debate make it difficult to have a serious discussion about this issue and others, but I hope that we can get to such a point very soon.

2 Comments on “On the Confederate Battle Flag and Statues”